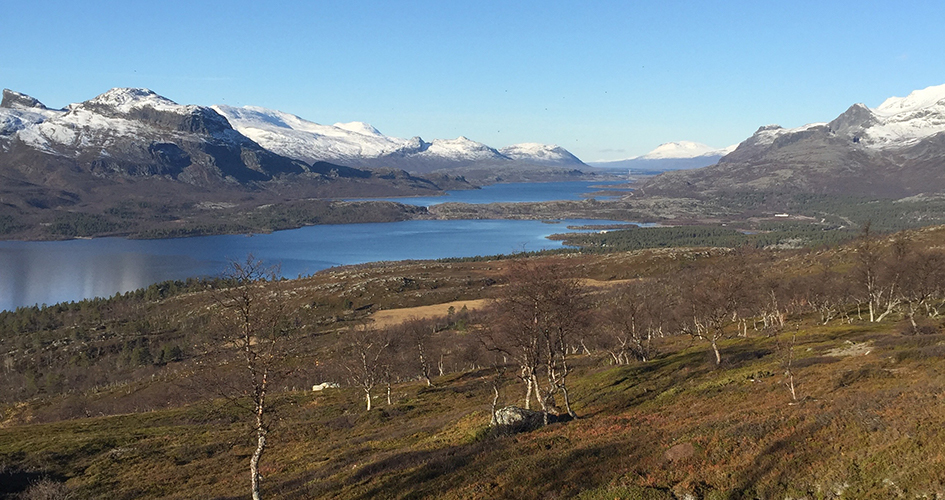 Five majestic waterfalls cascaded over the brink and roared down into Lake Láŋas.

Hence the name Stora Sjöfallet, which means great waterfall in Swedish, or Stuor Muorkke, the Sami name given to the park when it was formed in 1909. That name refers to a large “mårka”, that is land between two lakes. The national park was formed to protect the waterfall and its source lakes. Shortly after the park’s formation, its map was redrawn to generate hydroelectric power. The waterfall known as Stuormuorkkegårttje in the Sami language remains, but it is not as majestic as it once was.

The national park lies off both sides of the dam-regulated Áhkkájávrre reservoir. It is a varied national park with alpine mountains, glacial mountain heaths, mountain birch slopes and stately primeval pine forests. The boundary in the north is the deep Dievssávágge, regarded as the most beautiful valley in Sweden. Rising in the south is the majestic Áhkká massif and its glaciers. It is visible from almost anywhere you happen to be in the national park.

This area is grazing land for the Sami villages of Sirges and Unna Tjerusj, which have their settlements all around the area. A Sami village (“sameby” in Swedish) is not a village in the usual sense, but rather an economic and administrative unit engaged in reindeer husbandry. In the summer the herds graze in mountain valleys all the way to the Norwegian border. The road into Stora Sjöfallet/Stuor Muorkke makes the park easily accessible for visitors.

"The lake was the road before; it was the communication route. The north side was rather sparsely settled. It was blustery, not so attractive. The south side was Stuor Muorkke’s heart, where you came with the boats. When the road came, people moved to the side of the road. We were flexible and we moved to follow the fishing.”

Martin Suorra, talking about Stuor Muorkke, the place where he grew up.