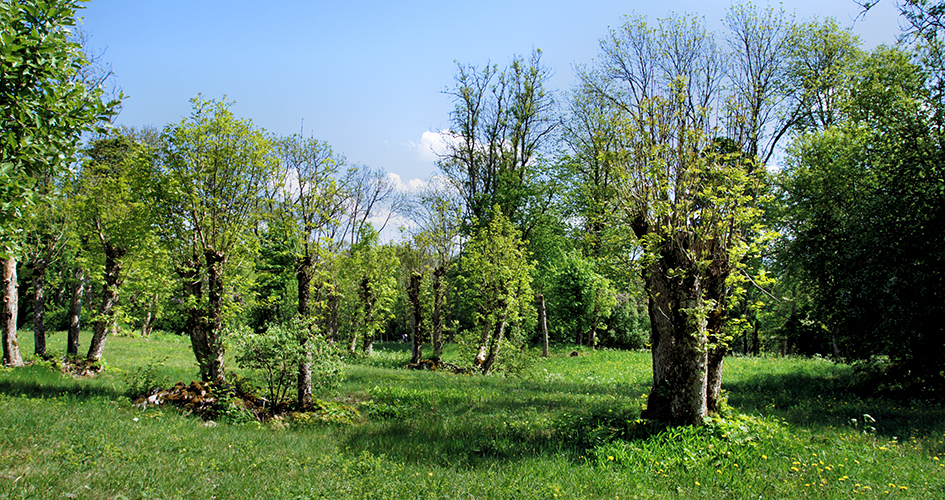 Garphyttan became a national park as early as 1909 with the goal of preserving the beautiful countryside and its profusion of flowers.

Conservationists at the time thought that farming’s impact could only be harmful and allowed the fields and grazing land to become overgrown. The magnificent displays of flowers that people wanted to preserve began to diminish instead. In the 1940s there was a realisation that the open and species-rich environments were a result of the farmers’ activities and grazing livestock. The meadows have since been managed through annual haymaking.

Most of the national park consists of forest, which has long been logged as a source of charcoal and to get wood and lumber for household use. The forest also served as grazing land for the farms’ livestock. During the latter part of the 19th century, almost all of the forest was cut down. The timber probably became charcoal wood for Garphytte Bruk, which at this time required large quantities of charcoal for its iron industry.

Here and there in the park’s forest, you can still find remnants of charcoal kilns in the form of bottoms of charcoal stacks. People then seeded the largely clear-cut land, mainly with spruce seeds. Some thinning occurred in the forest after the 1940s. Today the forest is being allowed to evolve freely in order to eventually become a forest with various tree species as well as old and dead wood.

Östra Gården – a mine owner’s estate

Garphyttan National Park occupies most of Östra Gården, one of four mine owners’ estates in Svenshyttan. Today the core of the national park consists of the old estate’s grounds and the remaining open land that used to be farmed.

Iron was an early industry

For a long time the iron industry and charcoal production were an important part of the economy, while agriculture was a lower priority. The estate’s residents initially took part in everything from making iron in the estate’s own foundry to cutting down charcoal wood and producing charcoal. After the foundry was closed at the end of the 17th century, the estate continued to supply the area’s remaining foundries and ironworks with charcoal and transportation.

The buildings are razed

At the turn of the 20th century, the Swedish government purchased Östra Gården’s land. Since the two families remaining on the estate had moved, all of the buildings were razed. Today a large ash tree stands on the old estate grounds, surrounded by clearly visible building foundations from several of the estate’s structures, including the manor, the barn, an earth cellar and a well.

The open land in Garphyttan National Park is made up mostly of old fields, which now are kept open through annual haymaking. The flora and fauna here today are typical of meadowlands of the past, including cowslips, viper's grass and milkwort as well as a number of different insects, such as wild bees and butterflies.

In Svenshyttan the meadow was more important than the field. The meadow provided winter fodder for all of the draught animals needed for iron production. Agriculture did not acquire greater importance until the iron industry declined during the latter part of the 19th century. The more fertile parts of the meadow were then cultivated as fields.

Most of the former meadowland is overgrown today, with the exception of hills and fringe areas around the old irregular fields. On what used to be the Great Meadow south of the estate grounds, a deciduous forest grows today.

In the past leaves were an important component of the livestock’s winter fodder. Branches with leaves were collected (pollarded) primarily from the trees and shrubs in the meadow, but from other suitable trees on the estate’s land as well. Pollarding was also an important part of maintaining the meadow. In this way farmers could control the proportions of sun and shade, and also how much nutrition the trees provided the meadow. To imitate this old way of management, many trees have been pruned severely here in the meadow. The shoots will subsequently be pruned at intervals of five to ten years.