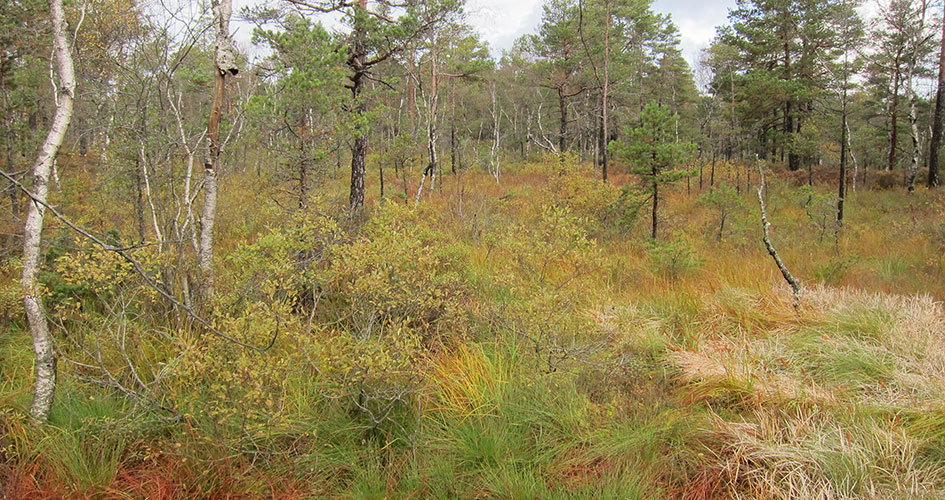 Among fauna the number of species is limited, characterised by a few that are typical for such a barren natural environment.

In a few locations that are more fertile, species include herb Paris, wood meadow-grass, baneberry and wood anemone. In small meadow-like fragments from past grazing and hay-making practices, quaking-grass, yellow rattle, viper’s grass and wolf’s bane grow. In autumn there is an abundance of mushrooms such as the common chanterelle, and somewhat later the funnel chanterelle appears.

The crests of the many high, long and narrow mountain ridges are easy to hike, with bare, old and sparse, gnarled, stunted pines. The flat rocks are covered by mounds of pixie cup lichen, reindeer lichen, tomentose snow lichen and woolly mosses. Large rocks that often lie scattered over the extensive flat rocks are overgrown with crust lichen such as the yellowish-green and grey map lichen and shield lichen, which grows in a circular shape.

Pines predominate in the forests, which never become especially large. Spruce thrive where the soil is a little better and it is a little wetter. Deciduous trees such as birch, asp, pussy willow, mountain ash and alder are scattered through the area, and oak can be found in a number of places.

The forests are seldom subject to forest fires today. Since grazing in the outlying land also has come to an end, the forests are starting to become concentrated with more and more spruce.

Bogs and fens make up about seven percent of the national park’s land area and usually lie in some of the many long, narrow valleys that exist. Often there is a lake in the valley that is surrounded in the north and south by fens and swamps, which sometimes also are covered with trees. On many hillsides sloping down towards the swamps, there are hillside fens where purple moor-grass predominates.

In the swamps, hare’s-tail cottongrass, deergrass, cloudberries and cross-leaved heath grow, and in some places you can find the bog asphodel western species that at the beginning of high summer lights up the swamps with its yellow flowers and light green leaves. In the zones between bog and lake, purple moor-grass, sweet gale, star sedge, common sedge, tormentil and moorland spotted orchid often grow. Sprig-like plants are most common in the transition zone between bog and lake. There you often find bog bilberry, bilberry and sweet gale.

There are more than ninety lakes and tarns in the area. Most are small, more than half being less than one hectare in size. Tresticklan, Kleningen, Stora Aborrtjärnet and Östra Bråtvallstjärnet are the only lakes measuring more than 5 hectares. Tresticklan lake, from which the national park gets its name, is 84 hectares, with a depth of almost 20 meters at its deepest point and an average depth of six metres. The lake is drained by a brook on the eastern edge. The water level previously was regulated, but at the outlet there now is a fixed dam.