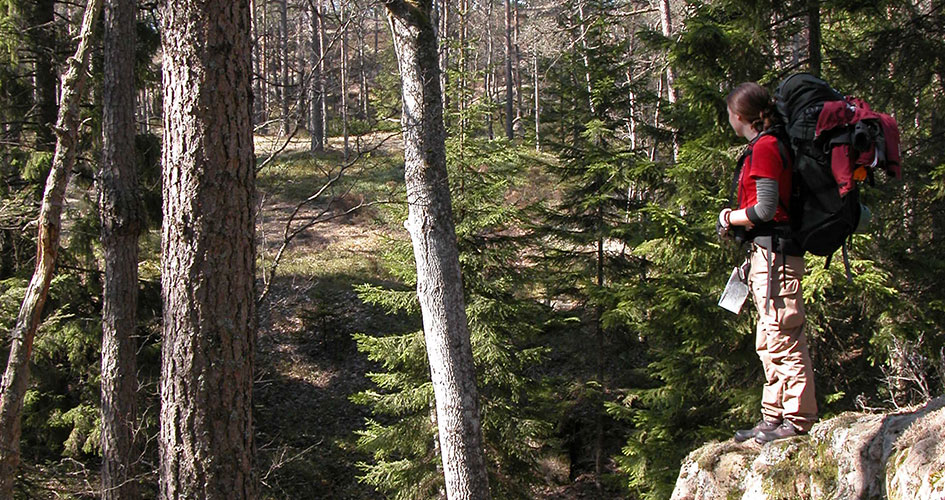 The Tresticklan area became a national park in 1996. It consists of a total of 2,908 hectares of protected land and water.

The goal is to preserve a rift valley landscape with wilderness characteristics and extensive natural forests as well as a small degree of cultural influence. The area also is included in the European Union’s network of nature protection areas, Natura 2000.

The oldest traces of human activity are Stone Age finds at Boksjön lake. No other ancient remains have been found in the area.
There are records of three farm and croft sites: one east of Budalsvika, one by Bråtarne and one by Lövskogen. The croft by Budalsvika was inhabited as far back as 1704 and abandoned at the end of the 19th century. Remnants of the Bråtarne farm (Orstjärnsbråtane) take the form of building foundations and open grassland just below Orshöjden. They also had a mill by the outlet from Märdögat lake, and you can still see the cornerstones of the small watermill.

In bygone times the area served as common land, where horses and sheep were turned loose to graze during the summer. From farms in Nössemark and Rävmarken, sheep and sometimes horses were released into the forest during the summer. This type of grazing operation culminated during the 1930s and 1940s, when hundreds of livestock could be grazing in the area. As recently as the summer of 1974, sheep grazed in meadowlands by Bråtarne and in the surrounding forest.

Read more about the history of Tresticklan National Park