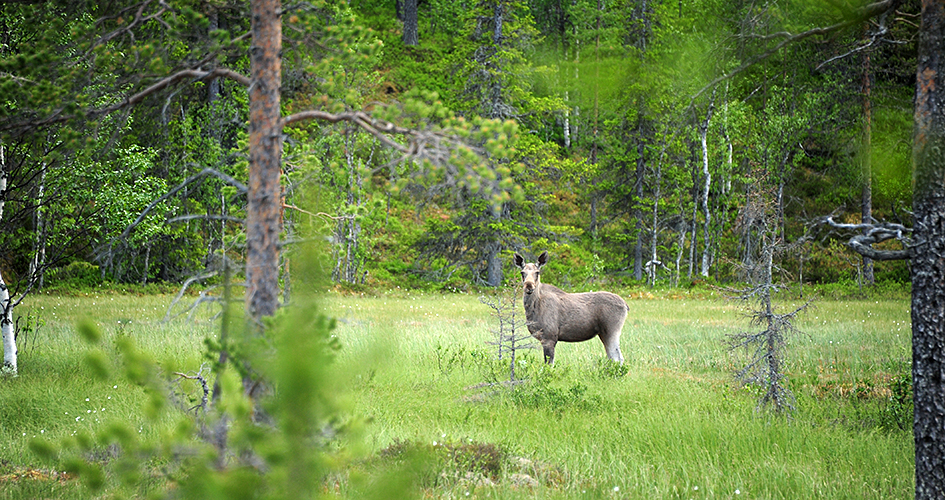 Many of Sweden’s wildlife species are encountered on Fulufjället mountain. You can find traces of elk, bear, wolverine, wolf and lynx. Smaller predators such as pine marten, ermine, lemming and fox also flourish here.

Species that do well in forests, on mountains and in water breed on Fulufjället. At the rock wall by the Njupeskär waterfall, the world’s largest falcon, the Gyr Falcon, has bred on a number of occasions. After the first breeding in 2008, four young left the nest, and two years later there were two that tried their wings.

Forest birds such as the black grouse, capercaillie and common wood pigeon are often spotted. The Pygmy owl, Hawk owl, Snowy owl and Tengmalm's owl have been seen as well as the Hen harrier. The Siberian jays that visit the naturum visitor centre every day are a safe bet. Dippers and Grey wagtails look for food in the rapids below the Njupeskär waterfall, while Ring ouzels and Chaffinches sing by the Njupeskär cabin's birch forest.

Other birds you should be able to cross off your life list at Fulufjället are alpine fowl such as the Greater scaup, Common scoter and Red-necked phalarope, but also merlins, Golden plovers, Ruffs, Golden eagles, Whimbrels and Cuckoos.

On Fulufjället you can fish for Arctic char, Salmon trout and Grayling, among others. The northern part of the mountain has long been known for good fishing.