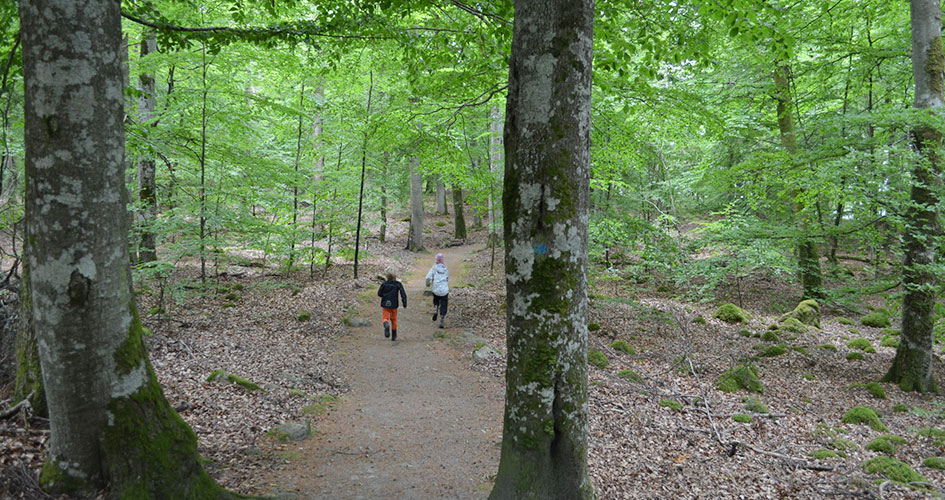 People in the area

Information on the traces left behind by people at Åsnen National Park can be found here. From the last inhabited farm on Bergön island to the “Sillabanan” railway, which ran all the way down to Halmstad.

The farm on Bergön island

An abandoned farmhouse can be found on the island of Bergön, in the very heart of the national park and a long way away from the mainland. The last family moved away from the island in the late 19th century. The house has been a holiday cottage in modern times. The cowshed has been demolished. There is a timbered outbuilding with a basement. They used to be a windmill on the island, but only the mill wheel still exists – it is used as a garden table. The house is surrounded by infields that are now largely covered with deciduous trees. Most of the Swedish tree varieties can be found in the area surrounding the farm: oak, beech, birch, hornbeam, elm, lime, maple and others.

Here, on the shores of Lake Åsnen, there used to be a narrow-gauge railway that was opened by King Oscar II in 1874. The railway was extended in stages, and in the end it went all the way down to Halmstad. The Karlshamn-Vislanda section was known locally as “Sillabanan” – the Herring Line – as a lot of herring was transported inland from the coast. Hulevik and Ulvö were two of the stops along this line. The railways came in for competition from trucks and cars in the 20th century. This railway was closed down in 1970, and the rails were taken up straight away. They say that people living on the island of Sirkö, on the other side of the lake, sailed here by boat to see the King opening the railway in 1874. But when they arrived at the Bispesholmarna islands, they found that the bream were spawning. This was an opportunity they could not miss – it was more important than the royal visit. So they stayed at home and went fishing instead.

The first steamer in Åsnen (1847) was the paddle steamer “König”, which was owned by Huseby bruk. Barges following the boat were used to transport goods from the ironworks to Ålshult and Grimsvik at the southern end of the lake. The products were then taken by road to ports in Blekinge. When the railway on the west side of the lake was completed in the 1870s, a company known as Åsnens ångbåtstrafik AB was opened in order to “maintain transport by steamer for the conveyance of passengers and goods”. Goods included wood, timber, potatoes and fruit. The boats were sometimes used for pleasure trips on Sundays. The steamer Blenda still sails around the lake, but nowadays she has a petrol engine. The bridges of Södra Sirköbron and Torne bro and the railway bridge at Ulvö were swing bridges in those days, allowing boats to pass. A railway was built on the east side of Lake Åsnen as well in the 1880s, reducing the need for transportation across the lake.

In Lake Åsnen, most of the islands with resident farmers had windmills. There was one windmill on Förarm, east of Sirkön. There were two windmills on Borgön, also east of Sirkön, and both of these were hollow post mills. There were a number of mills on Sirkön, the largest island in Lake Åsnen, but we only have evidence for two, both of which were hollow post mills. One of them was situated at Näset near Mjölknabben, and the other has been moved to the Museum Park in Växjö. The second was situated at Sundslätt, on the southern part of Sirkön island. There were probably more, because some fields have names like kvarnåkern (“mill field”) and kvarnalyckan (“mill meadow”).

There was also a windmill on the island of Bergön, located in the heart of the island world of western Åsnen. One example indicating that the windmills were extremely important involves August Magnusson, who owned a windmill on his farm, Segersnäs, next to Lake Åsnen, he sold the farm and moved to Getnö in 1893 – but he kept the windmill. This windmill still exists and has recently been renovated. This is the only windmill in the county of Kronoberg that is still in its original location.