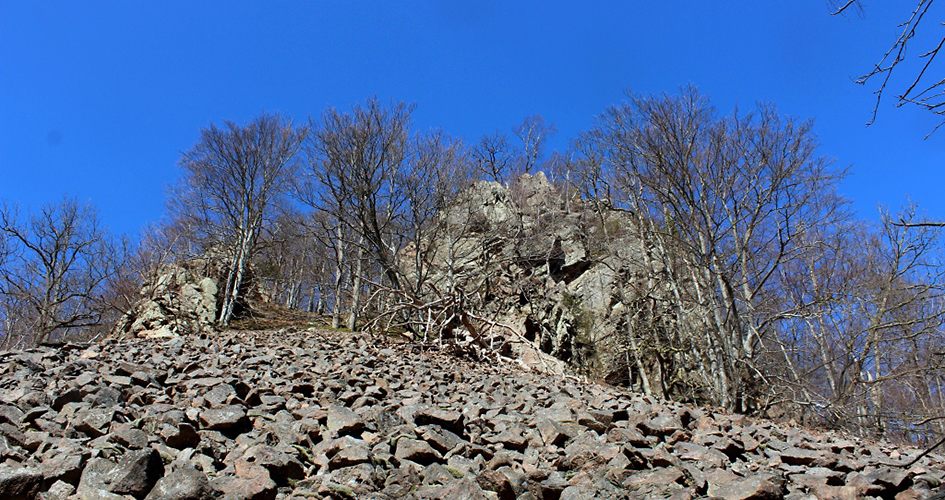 Söderåsen is a horst, a raised elongated block of the earth’s crust between two faults.

It probably was formed about 400 million years ago when the surrounding bedrock sank along fault lines. In connection with the formation of the horst, the rift valleys that run through Söderåsen were formed.

The predominant types of rock are gneiss and granite-gneiss. Volcanic activity during various periods has left behind amphibolite, diabase and basalt. When it cooled, the basalt formed typical columns that are visible by Rallate near Skäralid. In certain places the diabase gave rise to fertile soil that is reflected in more profuse vegetation that benefits from lime.

Scree on the ridge

Since its formation, the ridge has been affected by at least eight glaciations, but also by many other erosion and weathering processes between the ice ages. The massive scree slopes came about because the cliffs that had been perpendicular were subjected to frost erosion that took place primarily when the climate was much colder than it is now. Even today early in the morning in late winter or early spring, you can hear chunks of rock break loose and collapse onto the younger slopes that are still open. The older, often forested, slopes have no overhanging cliffs, and landslides there have ceased.

When you hike in the rift valleys, also look at the difference in vegetation between the open scree facing north and south. On the scree facing south, you will find stones covered with encrusting lichen that tolerates arid conditions, while the slopes facing north often are covered with moss and lichen carpets that require moisture.

Odensjön lake by Röstanga probably took on its shape because glaciers repeatedly formed in the bottom of “the pot” even between the ice ages.