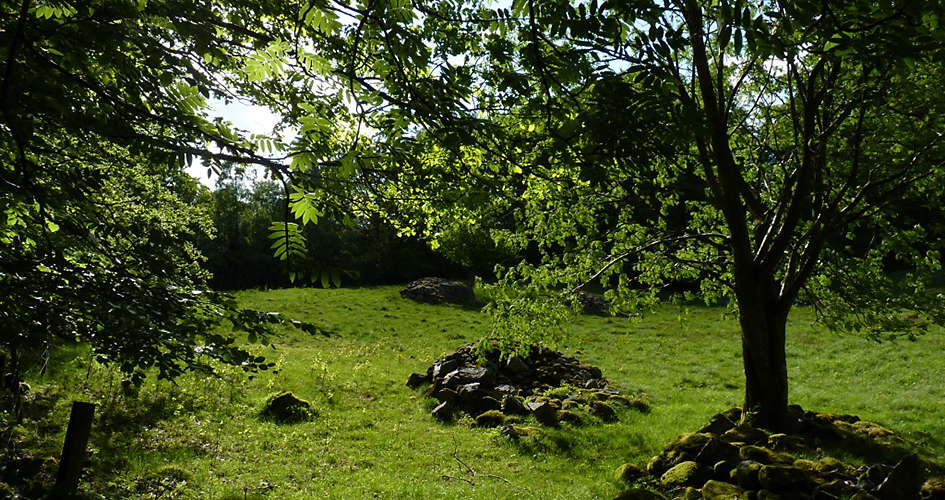 For perhaps a couple thousand years, people have cultivated land and made use of the forest in what today is the national park.

Mounds of stones cleared from ancient fields dating back to the Iron Age and more contemporary stone mounds, crofts and croft ruins testify to active farming in the past. Stone fences cross this way and that in the forest, indicating where property boundaries and pastures have been. Cows, goats and pigs have grazed and grubbed in the forest.

Since the ancient fields were abandoned during the Iron Age, the forested portion probably has never been as small as in the middle of the 19th century. The forest that existed then was much sparser than today because it was affected by grazing. The valley bottoms, which probably were entirely free of trees, were used for grazing or hay-making.

Hay was carried or hauled, first by oxen and later by horses, out of the valley or up the sides of the valley along several of the small roads that had been built and still are in place. The most well-known one is Offavägen, which goes from Kopparhatten down into the Skäralidsdalen valley. It was built by S. Offen from Tostarp.

Since the beginning of the 19th century, Lake Odensjön in the Nackarpdalen valley and Skäralid with Kopparhatten have been popular with tourist. By the end of 1800 the railroad was built with train stations in Röstånga and Skäralid. Large groups of people came for a walk in the lush green nature and to enjoy the views from the Kopparhatten.

With the railroad and tourists came a need to open a café on the top of the mountain. Initially it was not larger than a shed but was soon replaced by a proper restaurant with a dance rotunda for amusement.

Similar there was  a café and a dance rotunda in the Nackarpdalen valley where occasionally also archery and equestrian competitions were held.

In Skäralid a tourist hotel was built in the early 1900, with a dance rotunda here as well. The dam was constructed in the late 1920 and offered fishing for visiting tourist.